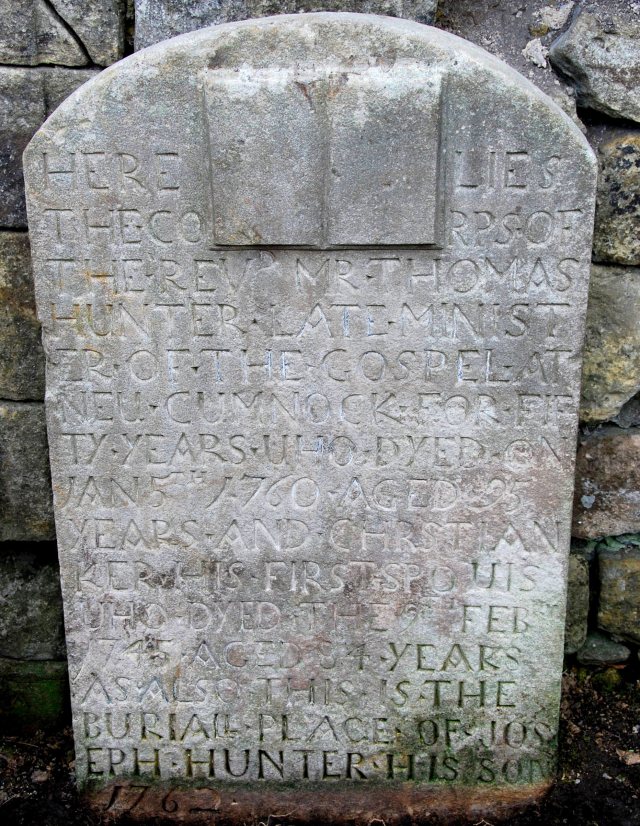 The parish records of Edinburgh show that Mr Thomas Hunter and Christian Kerr were married on 3rd October 1693, with the footnote that the marriage took place at Canongait and was conducted by Rev. Thomas Wilkie; he would later be elected, in 1701 and again in 1704, moderator of the General Assembly of the Kirk. Within a few years of their marriage the Hunters had moved to Kilmadok, Perthshire where their son Joseph (1696) and daughter Mary (1697) were born.

A few years later the Hunter family headed south to Sanquhar, Dumfriesshire where Thomas was appointed assistant to the Reverend Thomas Shiels, who from 1691 had served the parish of Sanquhar and Kirkbride. Thomas’s wife Christian Ker was the daughter of George Ker, Provost of Sanquhar and Marion Crighton who was descended from the Lords of Sanquhar. George had served as provost from 1662-1664 and then again in 1680 and was for a time also Chamberlain to his Grace the Duke of Queensberry.

The Hunters were soon on the move again, but only 10 miles or so up the Nith valley when Thomas was called to the parish of New Cumnock on 21st February 1706 and was ordained ten months later on the 19th December and so began a ministry that would span fifty-four years.

However his tenure didn’t start well and the Rev. Hunter was soon at loggerheads with the heritors of the parish, the chief of whom was now Penelope, countess of Dumfries, through non-payment of stipend during his first four years at New Cumnock. Although patronage had been abolished in 1690, the parish landowners were still responsible for the upkeep of the parish church and its minister. Indeed the Rev. Hunter’s stipend of 750 merks, even if paid, was considered inadequate with its 1000 to 1500 parishioners scattered over this large upland parish. Visits to his parishioners to provide instruction in the catechism or support in times of sickness or trouble must have been both spiritually uplifting and physically demanding.

The baptismal roll for the parish was introduced in September 1706 and this survives to this day as the Old Parish Records. Ellison Stewart, daughter of William Stewart and Jean McMichael in Mains (probably Castlemains) baptized on 22nd September 1706 has the honour of being first name recorded on the parish roll. On the 27th day of the following month, Thomas Kirkwood, son of James Kirkwood and Margaret Brown at Carcow is the first boy to appear on the records.

His wife Christian died in 1745, aged 84 years and she was buried alonside the east facing kirk wall. The minster now, 85 years old,  married again in 1750 to Jean Welsh. The parish records include in December 1719 the baptism of Jean Welsh, daughter of Gilbert Welsh and Margaret Reid in Blackfarding -could this be her?)

In 1756 the elderly minister, now aged 90 years, attempted to sue the heritors for the four years (1706-1710) of unpaid stipend, without success. The Reverend Thomas Hunter demitted from his duties the following year. He passed away in 1760 and lies buried in the alongside his wife Christian and son Joseph. His second wife Jean Welsh passed away twenty years later.

Several generations of his family lived in the fine farmhouse at East Polquhirter in the east of the parish including Dr. Thomas Hunter.