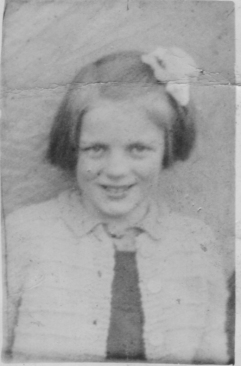 I am grateful to Mrs Ann Haddow for sharing some stunning photographs of Bank Glen, New Cumnock from her family album.

Ann or Craigie as she was known was born at Ingleston Cottage, Bank Glen in 1935 the daughter of John Stevenson and Ann Gillespie.

Ann married Alexander Haddow in the Bank Church and later moved to Irvine.

This map of Bank Glen shows the Bank House, home of the Hyslop family, Bank Cottages at the road-end to the house and sitting on the New Cumnock to Dalmellington road. Towards New Cumnock sits the Bankglen Inn.  John Hyslop formed the Bank Coal Company in 1860 and to the south miners rows at Craigbank house the miners and their families.

In 1870 the Lanemark Coal Company was formed and it rented out some office space at the Glen Inn from the owner Alexander McDougald , a grocer from Lugar. 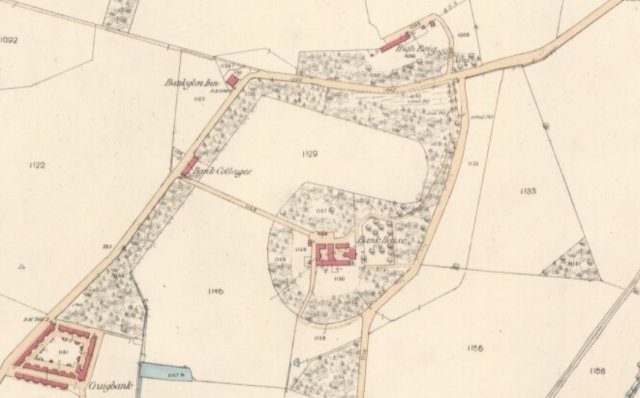 In 1872 the Education (Scotland) Act made primary school education mandatory in Scotland resulting in the building of public schools in the village of New Cumnock (1873) and at Bank (1874) for a combined estimated school roll of 600.  The existing parish school and the Free Church school in the village closed while the Lady Oranmore’s school at Dalleagles would later come under the auspices of the New Cumnock School Board. 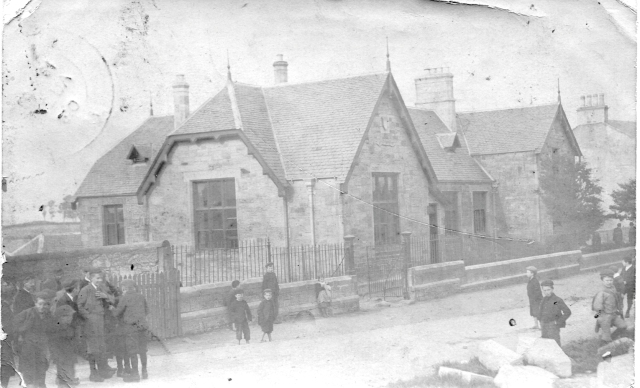 After the Disruption in the Church of Scotland in 1843 New Cumnock had been served by a Free Church built on the castlehill some three years later. The Bank Free Church was erected in 1875 adjacent to the school and built of corrugated iron giving rise to its local name the ‘Iron Church’.

Following the death of John Hyslop in 1878 his son William succeeded to the lands of Bank. He formed the New Bank Coal Company that year and by the time of the 1881 Census the population of Craigbank had grown to 300 or so.

Meanwhile the Lanemark Coal Company’s miners rows at Connel Park had taken root and in the same census the population here as 550 or so. The company continued to rent out properties from the McDougald family in Bank Glen and in turn rent them out to their employees. One of those employees was William Gillespie, pitheadman.

A native of Kier, Dumfriesshire William had moved to New Cumnock and found work initially as a farm servant at Dalleagles farm.  Here he met Janet Foster who worked as a domestic servant at Ardnith House, home of Robert Brown the manager of Lanemark Coal Company. The couple married in June 1871 in Janet’s home parish of Muirkirk. The following year their daughter Jeanie was born at Dalleagles. William still living at Dalleagles found work as a pitheadman at Lanemark Coal Company. In 1874 son Alexander was born at Kirkconnel Village (possibly at the home of William’s father who had moved here.

The family then moved to Bank Glen as tenants of Lanemark Coal Company in the McDougald owned property locally known as the Glen Inn. It was here that daughter Mary Ann was born in 1877 and son William three years later.  Sharing their  home in 1881 was William’s 15-year-old brother Robert Gillespie working as a grocer’s assistant and boarder Christine Galloway, teacher-mistress at the Bank Public School.

William Hyslop had succeeded to the lands of Bank following his father’s death in 1878 and formed the New Bank Coal Company that year.  The small community of Bank Glen had now expanded with a School, Free Church and a few more cottages along the roadside. 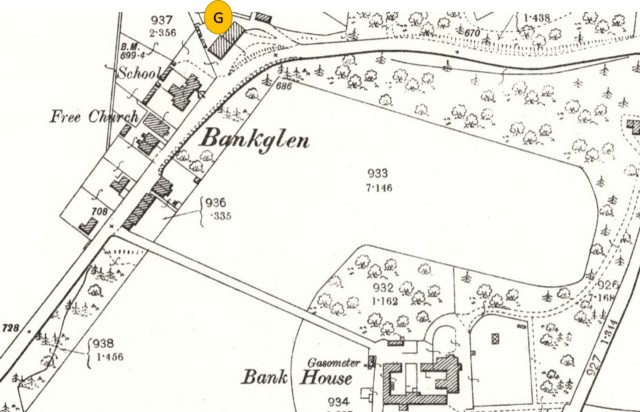 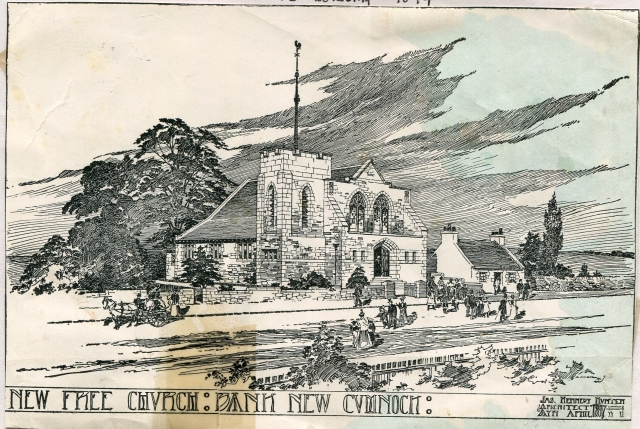 William Gillespie at 55 years old was now employed as a check weighman at the pithead. Along with his wife Janet (56) four of their sons and daughters were still resident in the family home Mary (23), Agnes (19) – a ‘pupil teacher’, John (14) – already working as a ‘colliery labourer’ and George (12).

In 1897 eldest son Alexander had married Annie Craig, daughter of Thomas Craig, a draper in Newton Mearns and Annie Craig. The couple settled in New Cumnock, living at Pathhead at first, where in 1898 daughter Annie McNaught Gillespie was born, before moving to live at Garrowscairn at Bank Glen where their son William (b.1901) was born.

Tragedy struck the family on the 9th January 1905 when William Gillespie, aged 59 years old, was accidentally killed while working with a wagon at the Lanemark Coal Company’s Rigfoot pit.

By this time the Gillespie family had purchased their own property at Bank Glen which comprised two semi-detached houses known collectively as Ingleston. On their father’s death ownership of Ingleston passed to children Alexander and Agnes.

Alexander was now working as a check weighman at the pit and he and his wife Annie added to their family with daughter Jessie (b.1903) born at Garrowscairn and son Alexander (b.1905) would soon follow, the first of the family born at Ingleston.

The two photographs above of Ingleston Cottage are thought to be from the period c.1903,  as are the following photographs.

This view is from the Bank Cottages on the right looking down the Bank Glen with the church at the bottom right and school bottom left, 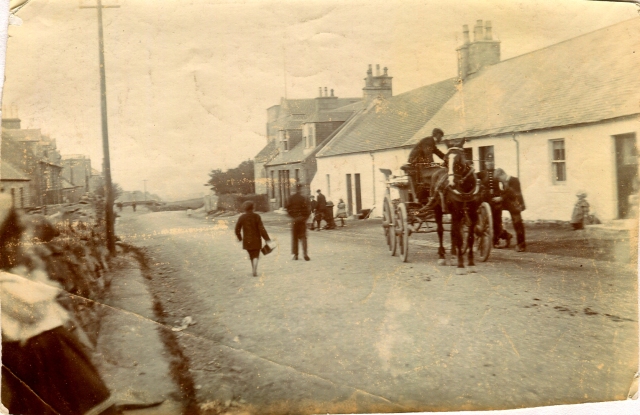 A closer look at the photo shows the local policeman talking with the two men at the horse and cart while further down stands the water fountain. The Post Office was located in the first cottage. 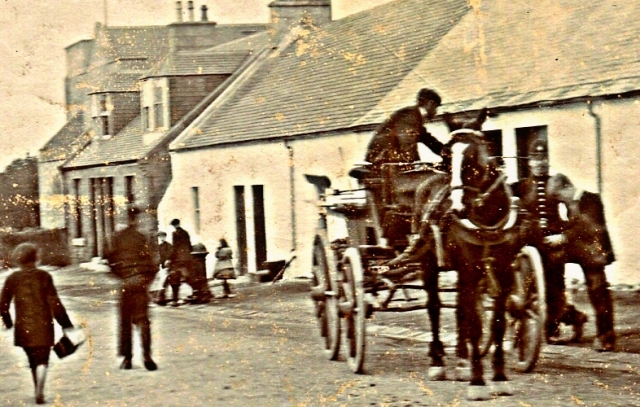 The milk cart stops outside the Gillespie family home at Ingleston.

Alexander Gillespie and his wife Annie at Ingleston. 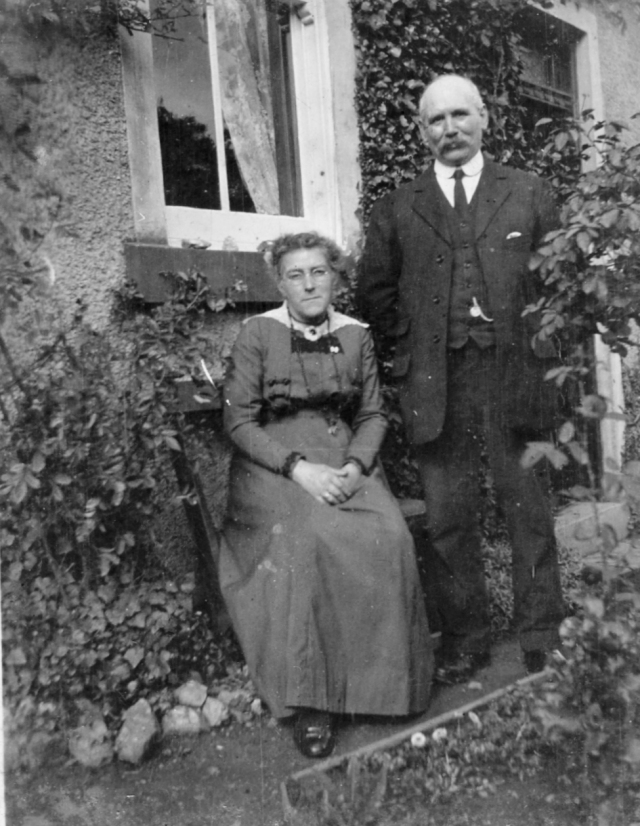 In 1909 the Lanemark Coal Company collapsed and its working were acquired by William Hyslop’s New Bank Coal Company to form a new company known as New Cumnock Collieries Limited.

By the 1911 Census Alexander Gillespie and his family were still resident in Ingleston but now with his widowed mother Janet and his siblings John and Jessie as “next door” neighbours.

The map of the time shows the development of Bank Glen including the Bank United Free Church and manse now on the other side of the road from the original ‘Iron Church. The row of houses known as Garrowscairn stretching up the brae, from opposite the road-end to Bank House,  with the adjoining Gillespie’s Ingleston Cottage.

Alexander and his family occupied one of the cottages whilst his widowed mother Janet occupied the other,

Red Cross Work Parties were formed during World War I to raise funds for ‘soldiers, sailors, airmen, prisoners, sick, wounded and dying’. A Cumnock Division was established which was made up from Work Parties from Old Cumnock, New Cumnock,Auchinleck, Lugar and Ochiltree.

Mrs Hyslop of the Bank was the chairman of the New Cumnock Work Party and the photo below is the Red Cross Clothing Work Party assembled at Bank House. The photo appeared in book published by the Red Cross in 1918 to illustrate the range of work carried in Ayrshire and sold for two shillings.  Mrs Hyslop is the 2nd row from the front and 7th from the left. In the back row far left (with the arrow pointing to her head) is Annie Gillespie. 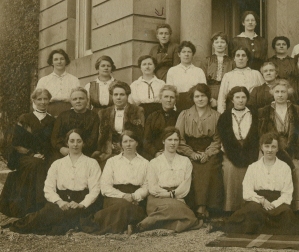 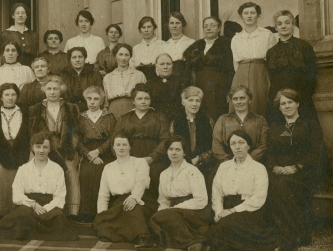 Alexander and his family occupied one of the cottages whilst his sister Jessie, now Mrs Jessie Jarvie occupied the other. Jessie had married John Jarvie, Head School Teacher in 1913 at the Bank United Free Church.

During the General Strike of 1926 idle coal-miners turned their hand to building a bowling green at Bank Glen on William Hyslop’s Bank estate. The Laird like his father John Hyslop was a keen sportsman and indeed in 1870 John was appointed the first President of the New Cumnock Bowling Club when it was formed.

On 22nd August 1926 the work on the Bank bowling green made the Sunday Post when the paper reported that workmen, when digging a drain, had unearthed some coins at the root of a tree which proved to be gold sovereigns of the early “George’s” reign.

The photograph shows the official opening of the club with William Hyslop of Afton and his wife Margaret are in the centre of the 2nd row from the front (Mrs Hyslop as plumage in her hat!) 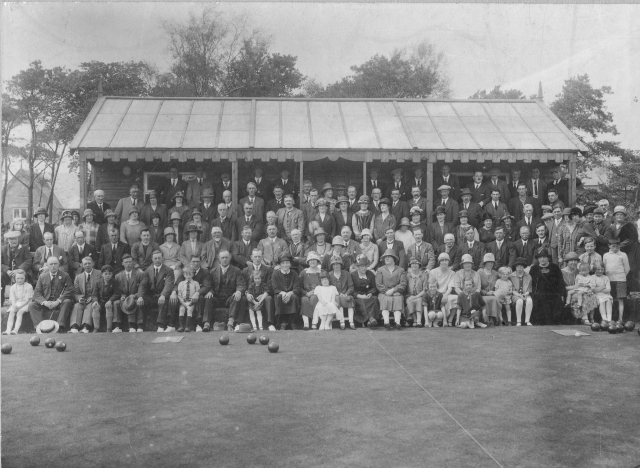 Alexander Gillespie and his wife Annie had new neighbours at Ingleston with daughter Ann and her husband John Stevenson living in the adjoining cottage.

It was here in 1935 that their daughter Ann Craig Stevenson known as Craigie and the future Mrs Haddow was born.

The map shows the extension to the Bank School and the Bowling Green behind the Bank Church. The Bank Cottages at the road-end to the Bank House are now gone with offices for National Coal  Board (created in 1947) now in place.  The small crescent known as Glen Park housed colliery managers and officials.

In 1957 Anne Craigie Stevenson married Alexander Haddow at the Martyrs’ Kirk, New Cumnock. The last service in the Bank Church was held on the 7th May 1961.

The church was later demolished and the foundation stone was built into the wall of the adjoining manse.

The semi-detached pair of Ingleston cottages still stand at the top of the Bank Glen but the row of Garrowscairn has gone. The original Bank School has also gone while the later school extension still remains but no longer in use. The School House and Church manse are now private dwellings while a number of other more modern private houses can also be found in the Bank Glen 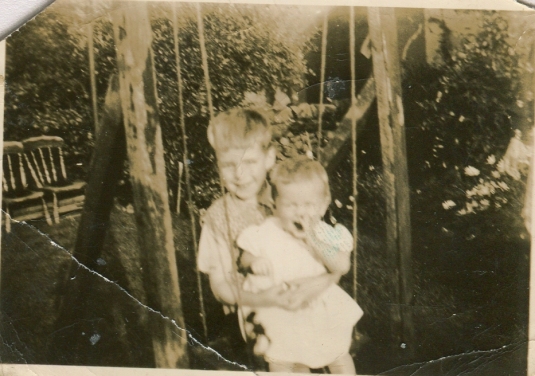 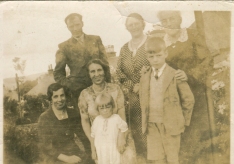 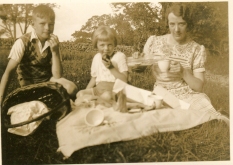 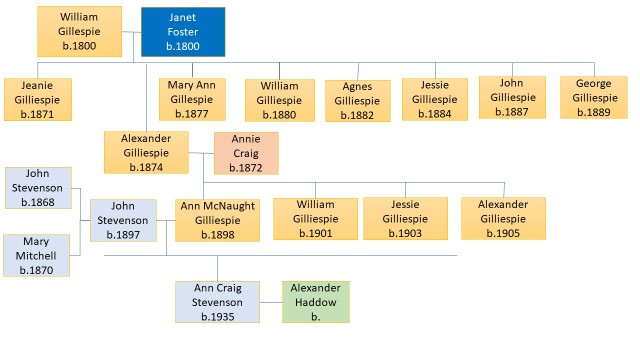