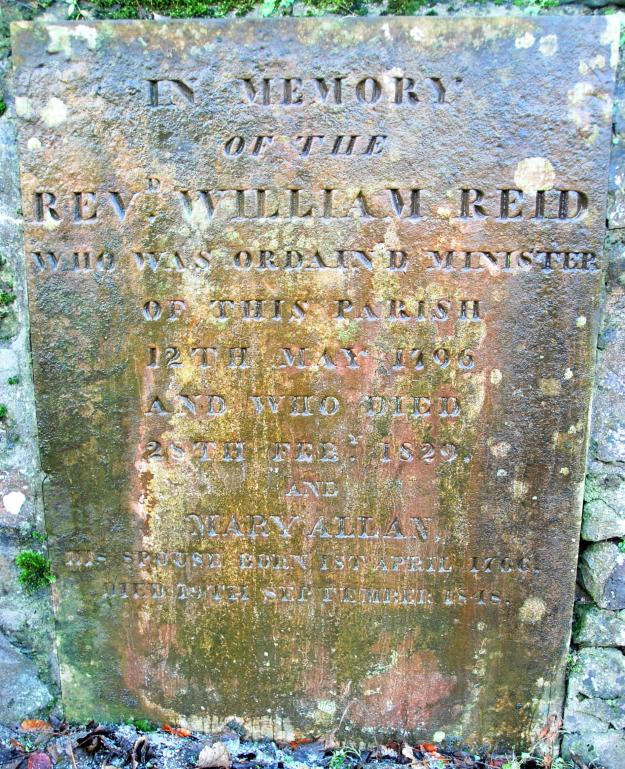 The Reverend William Reid suffered the wrath of John Logan, friend of Robert Burns, and other heritors when he proposed to cut down trees in the glebe which he claimed were ‘going fast to decay and rendered the manse uncomfortable from damp and smoke’. The case went to the Court of Session (1799) which came out in favour of the minister. 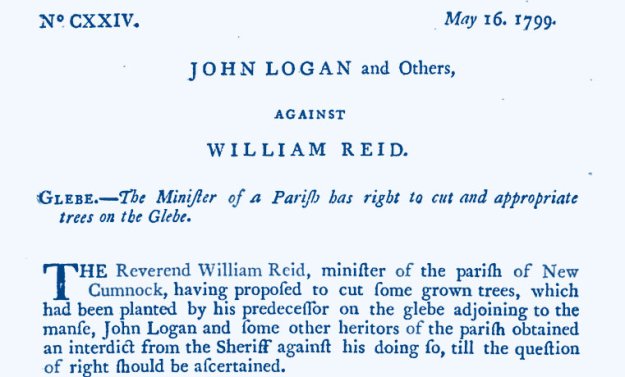 ‘The Lords remitted to the Lord Ordinary, to remit to the Sheriff, with instructions to assoilzie the minister, and recall the interdict, and farther found him entitled to expences’

This was a difficult time for the Church of Scotland and national schisms fractured the congregation of the Auld Kirk with some parishioners joining the Reformed Presbyterians (New Cumnock) or, Burghers (Old Cumnock) or Anti-Burghers (Auchinleck).

The Reverend William Reid served the parish for 33 years before passing away in 1829 and lies buried against the kirkyard wall, the last of the Auld Kirk ministers to be buried here.

Several of the names of parishioners that appear in Auld Kirkyard Trails appear in the minister’s Will and Testament. These include John McKnight of the Old Miln and his brother George McKnight in Polshill who collectively were due to pay the sum of £100 to the William Reid andWilliam Hyslop Esq. of Blackcraig owed £500. Meanwhile those heritors in ‘arrears of  stipend crop of 1828’ were N.S. Buchanan Esq. (Knockshinnoch), Misses Stewart (Afton estate), James Cuthbert (Dalleagles) and George Ranken (Whitehill),

His widow Margaret moved to Symington perhaps living at the manse with the Reverend Thomas McWharrie and his family – he is recorded as Commissioner (of oath) in the Will and Testament of the Reverend Reid.  Margaret later lived at the manse at Dreghorn, then home to Reverend John Jamieson and his wife Mary Young, the daughter of William Young and Ann Allan – presumably a relative of Margaret’s. She passed away in 1848 and was laid to rest alongside her husband in the Auld Kirkyard, New Cumnock.