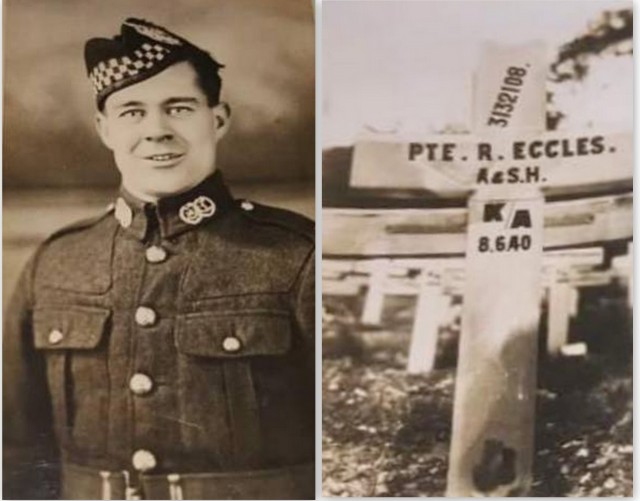 Robert Eccles was the first soldier from New Cumnock to be killed in action in World War II. His story begins with his grandfather Robert Eccles

Robert Eccles was born in 1833 at Tradeston in the Gorbals, Glasgow, the son of Irish immigrants Samuel Eccles, weaver and Agnes Johnstone.

By his teenage years, Robert had left the family home to find work in the Ayrshire coalfield, initially at Craigmark, in the parish of Dalmellington. It is here on 31st December 1856 that 22-year-old Robert married 20-year-old Mary Duffy, daughter of John Duffy, weaver in Newton-on-Ayr and Mary McKenzie. The marriage was conducted after the Banns were solemnized according to the Free Church of Scotland.

The couple and their surviving children (Mary, Sarah and Robert) later moved to New Cumnock where they lived at the Stable Row, Craigbank, in the miners’ rows owned by the Bank Coal Company.  Here, daughters Margaret (b.1868), Agnes (b.1870 d. 1875) and Marion (b.1872) were all born. On the 10th August 1881, the last of their children Agnes Robertson Eccles was born at Criagbank; 48-year-old Robert now working as a pit roadman.

By Permission of the National Library of Scotland

At the time of the 1891 Census Robert and Mary were still living at Craigbank along with their recently widowed son Robert; their daughter Maggie and her new born daughter Elspeth (named after her brother’s late wife) and daughter Agnes. Also living in the house were grandchildren Walter and Mary Cowan, children of Mary Eccles and Thomas Cowan. Their parents would later divorce and Walter and Mary were brought up with the surname Eccles, while in legal records they were referred to as Cowan.

Ten years on, Robert (68) and Mary (64) and still living at Craigbank, elderly Robert was now working as a coal picker. Living in the family home were son Robert (35) and his daughter Lizzie (6); daughter Agnes (19) and grandchildren Walter (15) and Mary (13).

In July 1904, Mary Eccles (68) died at home in Craigbank and seven years later in March 1911, Robert Eccles passed away.

In the 1911 the Eccles household at Craigbank was now made up of Robert (44), pit labourer and his daughter Lizzie Shirkie (15); his sister Agnes (27) and his sister Mary (51) along with her son Walter (15), coal hewer.  Living next door was his sister Marion and her husband James Henry and their six children.

In 1909 the Bank Coal Company had acquired the pits and leases of the failing Lanemark Coal and formed the New Cumnock Collieries Ltd. The company began to increase their housing stock and built them to a higher standard with the miners’ homes now furnished with bathrooms and water-closets. This included the building of Craigbank Crescent which began in 1913 and soon after the Eccles family were resident at No. 9 while the Henry family settled at No. 15; sadly, their next-door neighbour David Nisbet would lose his life in the Great War. 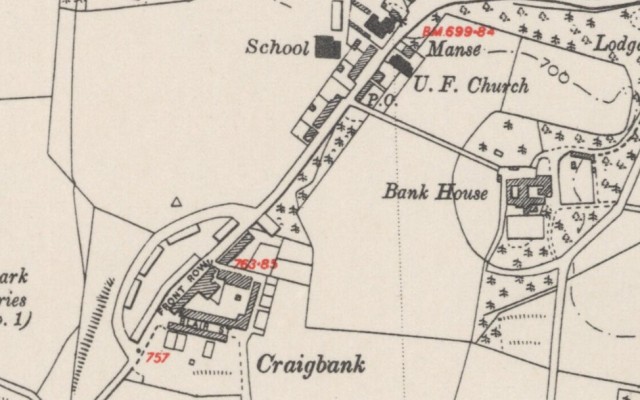 By Permission of the National Library of Scotland

On the 19th July 1918 Agnes Eccles gave birth to a baby boy Robert Eccles at the Maternity Hospital in Rottenrow, Glasgow, the latest addition to the Eccles household at No. 9 , Craigbank Crescent.

Young Robert grew up at Craigbank and attended the Bank School. His mother Agnes helping look after the house while her cousin Walter, as head of the house, would undoubtedly provide a father figure. After leaving school 14 year old Robert joined a new group of teenagers going to work at the Bank No. 6 pit in the early 1930’s. By the end of the decade in July 1939 he was called up to the 8th Battalion of the Argyll & Sutherland Highlanders. On the 3rd September 1939 Britain and France declared War on Germany.

The Wartime Memories Project provides some background to the movement of the8th Battalion.

“The 8th Battalion of the Argyll & Sutherland Highlanders went to France in early 1940 as part of the British Expeditionary Force. along with the 8th Battalion, forming part of the 51st Highland Division. Both suffered grievous casualties in the retreat to Dunkirk with many men lost or taken as prisoners.”

George Sanderson  writing in  “New Cumnock Long Ago and Faraway” describes the circumstances under which Robert lost his life.

“On the 5th June the Argylls crossed the River Bresle and attacked the enemy flank but the German infantry were pouring in to back up their armour spearhead. By the 8th June the Argylls were pushed back across the river. That day, German Stuka dive bombers and fighter planes were screaming over, strafing with machine guns and cannon fire. On one of those attacks the troops dived for cover under a line of railway tracks but Robert either did not have enough shelter or sufficient time; the shells ripped into the track where he was crouched.”

“We deeply regret to record the death in action of the first soldier from our area in the person of Private Robert Eccles, Argyll and Sutherland Highlanders aged, 21 years. Robert was probably the first New Cumnock lad to be in khaki as a military man when called to service in July last year. Had Private Eccles not been of age until the war broke out, he would have been a reserved miner in Bank No. 6 mine, Pte. Eccles was in retreat from Dunkirk and was posted missing 5th June. Information received by his Uncle Walter Eccles, 9 Crescent, Craigbank. Robert was a keen member of the cyclists club.”

A LETTER FROM FRANCE

Amelia Nairn kindly provided the photo of Robert and his grave in France. Her mother was Minnie Gilmour (nee Henry) the daughter of William Henry and Amalia Cantolla. Her grandfather William was the son of James Henry & Marion Eccles and was a cousin of Private Robert Eccles.

Amelia also provided this photo of a postcard of a typed letter sent to Mary Eccles, Robert’s aunt. 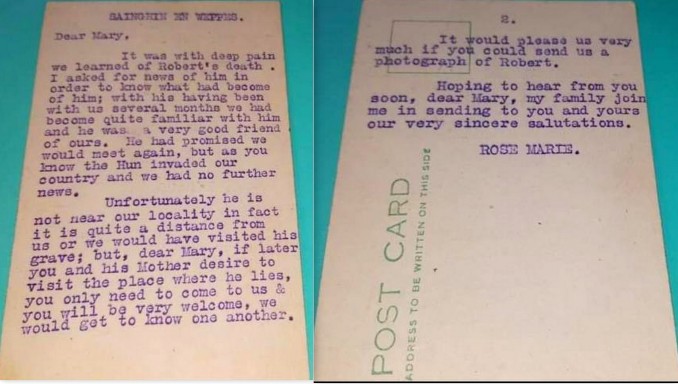 It was deep pain we learned of Robert’s death. I asked for news of him in order to know what had become of him; with him having been with us for several months we had become quite familiar with him and he was a very good friend of ours. He had promised we would meet again, but as you know the Hun invaded our country and we had no further news.

Unfortunately he is not near our locality in fact it is quite a distance from us or we would have visited his grave; but, dear Mary, if later you and his Mother desire to visit the place where he lies, you only need to come to us & you will be very welcome, we should get to know one another.

It would please us very much if you could send us a photo of Robert.

Hoping to hear from you soo, dear Mary, my family join me in sending to you and yours our very sincere salutations.

Sainghin-en-Weppes is a commune in the Nord department in northern France. It is part of the Urban Community of Lille Métropole. Robert presumably became friends with this family while stationed nearby for “several months”. A very moving letter indeed!

Amelia also found the following poem but is uncertain if this is related to Robert. 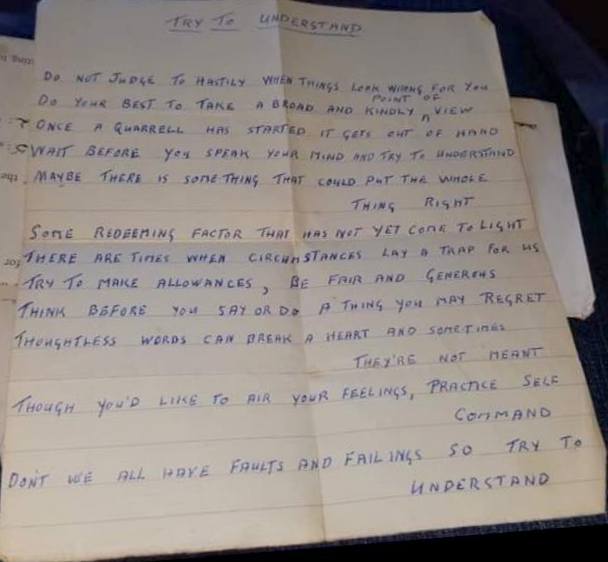 Robert Eccles was buried in Incheville Communal Cemetery, Seinn-Maritime, France. Incheville is a village in the valley of the River Bresle mid-way between Dieppe and Abbeville, and 6 kilometres south-east of the town of Eu. The cemetery is situated on a minor road to the west of the village. Incheville Communal Cemetery contains 68 Commonwealth burials of the Second World War, 33 of them unidentified, and all dating from June 1940. The grave was originally marked by a wooden cross which was later replaced by a Commonwealth War Graves Commission stone.

Private Robert Eccles is the first name on the World War II (1939-1945) east face of the New Cumnock War Memorial in Afton Cemetery. Although were unable to visit Robert’s grave they would have witnessed the names being added to the memorial.  Robert’s mother Agnes Robertson Eccles stayed the rest of her days at Craigbank Crescent and passed away in 1959, at Ravenspark Hospital, Irvine at the age of 78 years old.

Many thanks to Amelia Nairn for sharing the photos and letters