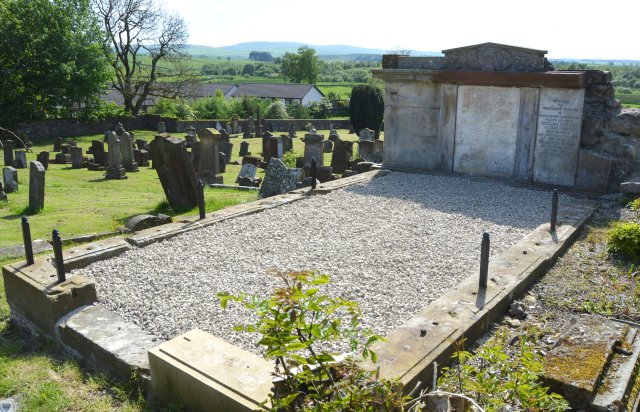 In Memory of
WILLIAM HYSLOP ESQUIRE
of Blackcraig
died at Bank House on the16th May 1850
aged 75 years
OF JAMES HIS THIRD SON
died at Bank House on the16th Nov 1821
aged 1 year
OF HAMILTON D.B HIS FIFTH SON
died at Bank House on the 21st June 1826
aged 1 year and 4 months
OF THOMAS HIS SEVENTH SON
died at New York on the 1st Nov 1851
Aged 23 years
OF MARGARET LOGAN SECOND DAUGHTER
OF JOHN LOGAN OF KNOCKSHINNOCH
AND SPOUSE OF THE ABOVE WILLIAM HYSLOP
of Blackcraig
who died at Crawick Cottage on the 26th June 1864
Aged 78 years
JOHN HYSLOP ESQUIRE
BANK HOUSE
WHO DIED 7TH MARCH 1878 AGED 60 YEARS
AGNES KIRKLAND
SPOUSE OF THE ABOVE JOHN HYSLOP
WHO DIED AT AUCHENGEE COTTAGE
16TH NOVEMBER 1903 AGED 76 YEARS

William Hyslop was only 12 years old when inherited the lands of Blackcraig, Bank and Dunside from his grandfather, William Aird of Kelloside in the neighbouring parish of Kirkconnel. It is unclear where William lived at that time however the family have strong connections with the properties of Tower, Gavels and Carco in that parish.

Farms with Hyslop associations in Kirkconnel

William later took up residence at Blackcraig and in 1811 he married Margaret Logan second daughter of John Logan of Knockshinnoch & Laight the celebrated supporter and acquaintance of Robert Burns. Born at Laight in 1786, Margaret would have been an infant when Burns visited Laight. Together William and Margaret had eight children all born at Blackcraig.

William’s years of hard work on the land transformed the estate and in 1838 he and his eldest son John were recognised by the Highland Society and Blackcraig won the award for the best-managed farm in Kyle.

Soon after, having little scope for further improvement William now in his mid-60s returned to his native Dumfriesshire, to reside at Tower where he quickly, gained a similar reputation as the best farmer on the district. Illness forced him to return to New Cumnock and retire to Bank House in the Hyslop’s lands at Bank where he died in 1850, aged 75 years.  Margaret returned to Tower now managed by her son Hamilton Douglas Boswell Hyslop, she passed away in 1865 at Crawick Cottage and lies buried in the Auld Kirkyard, New Cumnock with William and two of their sons who had died in infancy.

John inherited his father’s estate in 1850 at a time of great change in New Cumnock with the completion of the Glasgow-Dumfries railway line that would not only open up new markets but also bring new competitors for the coal being hewn from the parish.

In 1860 along John along with his business partner Kenneth McKenzie, vastly experienced in the coal industry,  formed the Bank Coal Company.

Three years later he was the brains behind establishing the Creoch branch line to connect his Bank estate with the main railway line and his coal markets. The company would later acquire a lease to work Knockshinnoch Minerals

John Hyslop became a major figure in the parish, not only as a coal baron but a JP and landed proprietor. He married Agnes Kirkland the sister of Alexander and Hugh Kirkland, originally from Sorn, who had quickly established themselves as leading merchants in the town and in 1850 had established the New Cumnock Gas Light Company. Together John and Agnes had three sons William, Thomas and George and a daughter Jane – all born at Bank House.

In the winter months John was a keen curler and in the 1870’s skippered the New Cumnock rink to Ayrshire domination with three successive victories in the Eglinton Jug. No skipper has equalled or bettered that since. John was also the first President of New Cumnock Bowling Club.

John’s other great passion was greyhound coursing and he was Vice-President of the Kyle and Upper Nithsdale Clubs.  In March 1878, he attended as usual the annual Waterloo Cup meeting in Lancashire – the premier coursing event in the UK – and a few days later he passed away at Bank House, aged 60 years. His wife Agnes lived on for many years and died in 1903 at Auchengee Cottage, Pathhead and lies buried with John in the Hyslop lair in the Auld Kirkyard.

John’s eldest son William inherited his father’s estate in 1878 and the appellation of the ‘Laird of Bank’. On his father’s death he formed the New Bank Coal Company and the lease of the Knockshinnoch minerals was allowed to lapse.

A single-minded and public-spirited man he would oversee the expansion of the company with desire to put the New Cumnock coalfield on the map and bring prosperity to the growing community. Before the turn of the century almost 200 men worked at the New Bank Coal Company.  In 1909  Hyslop acquired the mineral leases of the Lanemark Coal Company and formed New Cumnock Collieries Ltd, now with a combined workforce of just under 1000 employees. 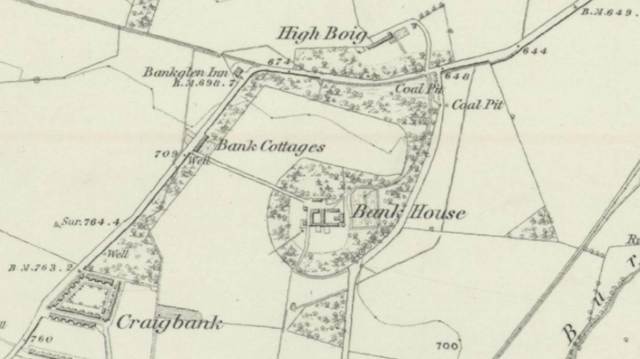 William married Margaret Gibson, daughter of Andrew Gibson spirit dealer in Craigbank. Her father was born at Nith Bridgend, the son of Andrew Gibson, surgeon and this property would later become the Afton Hotel. The couple had no children but enjoyed a long married life together at the Bank House.

Like his father, William was also a keen curler and was President of the club for over 50 years.  He was also honorary president of the Golf Club and a member of the Kyle Coursing Club.

William died in December, 1936 , aged 81 years and so ended three generations and 150 years of Hyslops at Blackcraig and Bank and the estates fell to his younger brother, now Sir Thomas Hyslop living in South Africa. Margaret passed away at Bank House in 1945 and lies with her husband ‘The Laird of Afton and Bank’ in the Hyslop lair in the Auld Kirkyard.