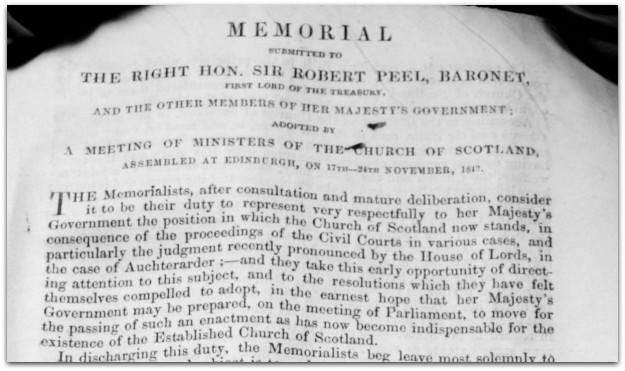 A Meeting of Ministers of the Church of Scotland assembled at Edinburgh on 17th -24th November 1842 resulting in the above memorial [ Scots Law ‘ a statement of the particulars of a case‘] being submitted to the Prime Minister, Robert Peel and his government. The ‘case of Auchterarder’ is cited as a cause for concern. It was here in 1834 that the parishioners unanimously rejected the patron’s nominee and refused to proceed to his ordination and injunction. The nominee appealed to the Court of Session in 1838 which held the Church in applying the Veto Act had acted beyond their powers. The Court went further and ruled that the established Church was a creation of the State and that it derived its legitimacy by Act of Parliament. The issue of patronage now esclated to the spiritual independence of the Church , which was now clealry on a collision course with the State.

The memorial also contained a list of the ministers by Synod that supported the submission of the memorial. 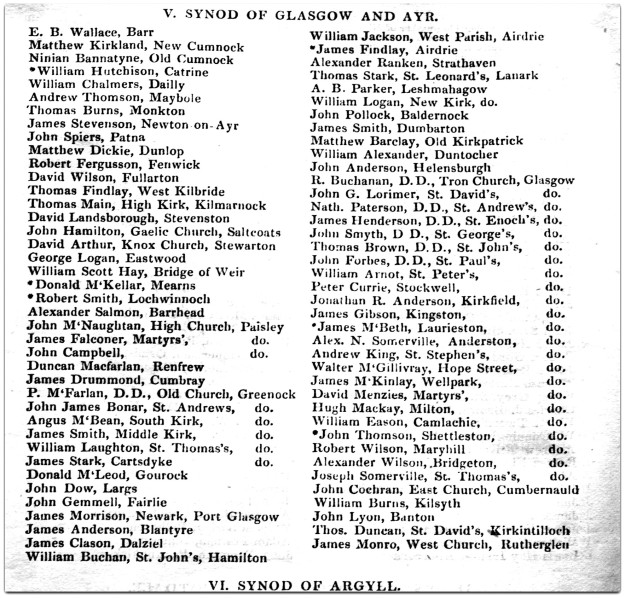 In the 1841 Census David is recorded as a preacher living in the Findlay household at Park Lane, Kilmarnock – more than likely relatives of his mother Jean Findlay.

2. An Address to the People of Scotland 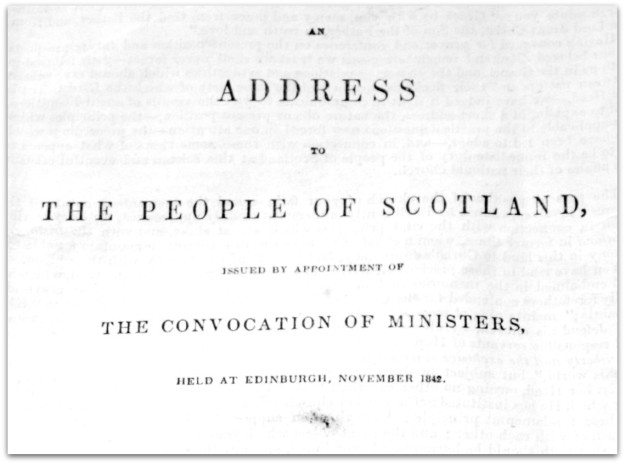 The “Address to the People” rendered it unavoidable for the whole community to consider their own duty in the matter, and to determine whether they were prepared to permit their religious liberties to be utterly subverted and the Church of their fathers overthrown, without one constitutional and legal attempt to save them. [‘History of the Church of Scotland: From the Introduction of Christianity to the Period of the Disruption’, Rev. W.M. Hetherington (1843)]

3. The Church of Scotland Claim of Rights 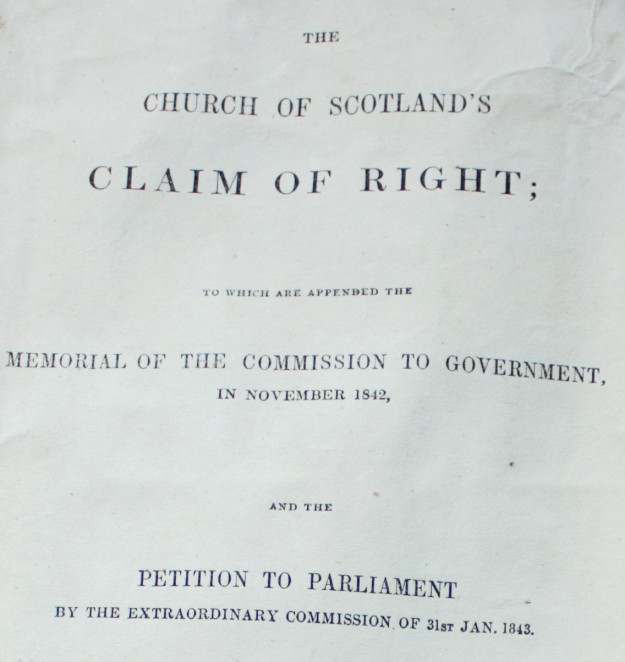 ‘The object of the Claim of Right was to seek protection from the encroachments of the Civil Courts on the spiritual jurisdiction of the Church, particularly with reference to her power of defending her congregations from the intrusions of presentees in opposition to their will; and this while it was perfectly consistent with the co-existence of patronage, was represented as absolutely essential to enable the Church to carry on government of Christ’s House in accordance with what she believed to be His law; and it was also clearly indicated, that a refusal to give the protection and redress desired would compel the Church to abandonment on the benefits and privileges of the Establishment’

‘The Commissioners to the General Assembly of the Church of Scotland, appointed to have been holden this day, having met in St. Andrew’s Church, the Ministers and Elders, Commissioners thereto, whose names are appended to the Protest then and there made, and hereinafter inserted, having withdrawn from that place, and having convened in a large Hall at Canonmills, in presence of a great concourse of Ministers, Elders, and People, and having duly constituted themselves in the name of the Head of the Church, and appointed the Rev. Dr. Chalmers to be their Moderator, the Protest above-mentioned was produced and read, and thereafter ordered to be recorded as follows:—’

‘WE, the undersigned Ministers and Elders, chosen as Commissioners to the General Assembly of the Church of Scotland, indicted to meet this day, but precluded from holding the said Assembly by reason of the circumstances hereinafter set forth, in consequence of which a Free Assembly of the Church of Scotland, in accordance with the laws and constitution of the said Church, cannot at this time be holden,—’

The document go on at length can concludes

‘…..with an assured conviction, that we are not responsible for any consequences that may follow from this our enforced separation from an Establishment which we loved and prized—through interference with conscience, the dishonour done to Christ’s crown and the rejection of his sole and supreme authority as King in His Church.’

It is signed by the Ministers and Elders including Thomas Chalmers, the first Moderator and Mathew Kirkland , the first Free Chuch minister of New Cumnock. 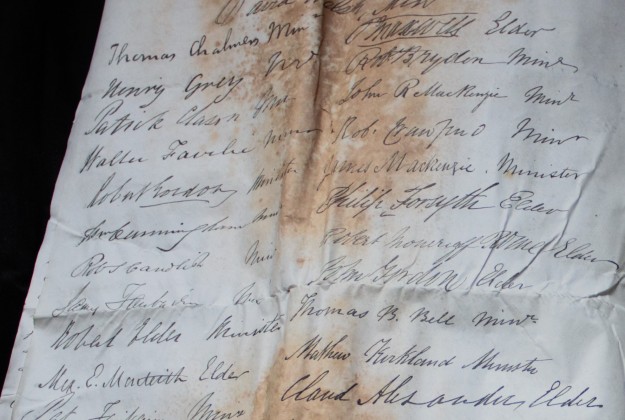