The headstones of John Gibson, John Lees and their families can be found in the Auld Kirkyard, New Cumnock. Although, there is no information on either stone to suggest any connection between these two men, they raised their families in New Cumnock as work colleagues and friends. 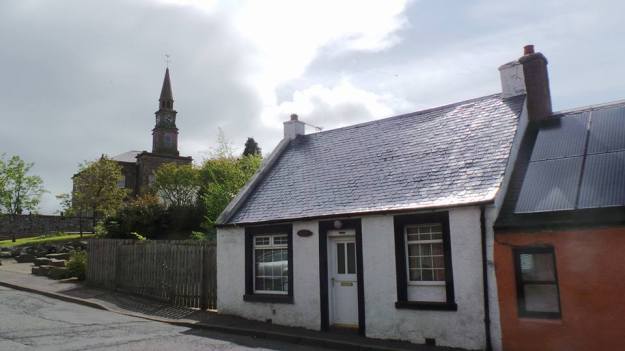 John Gibson was born on 29th June 1855 at Tarbolton, Ayrshire the fifth child of William Gibson and Agnes Oliver. His father was an agricultural labourer and the family lived at 11 Burns Street a stone’s throw from Tarbolton kirk. As a 15 year old he began learning his trade as a shoemaker’s apprentice, living at Smithfield farm on the outskirts of the village.

Ordnance Survey Map (1896): Reproduced with the permission of the National Library of Scotland.

It is unclear when John moved to New Cumnock, however in 1881 he was residing as a boarder at Mains Avenue, New Cumnock working as rural letter carrier. Mains Avenue, now known as Castlemains Avenue, then comprised two semi-detached dwellings on the road from Afton Bridgend to Castlemains Farm. The letter ‘P’ can be seen at one of the dwellings in the Ordnance Survey map and this symbol was often used to indicate, amongst other things, ‘small-scale Post Office’. At that time Cumnock-born Mary Kerr was the post-mistress at the main Post Office in the Castle. A young widow, aged 35 years, she lived there with her two young children, both of whom had been born at Ontario, Canada.

In 1884, John Gibson married local girl Margaret Stewart McCartney. Her father John McCartney had moved to New Cumnock from Argyll and worked as an agricultural labourer at Merkland farm where he met and later married Janet Steele, daughter of the farmer Robert Steele and Flora Vass. John McCartney then moved from Merkland to the Castlehill (Stank Brae) and worked as a railway porter. The marriage was conducted by the Free Church minister George Anderson and the witnesses to the marriage were Margaret’s sister Flora and John Lees, a friend and colleague of John.

John was born on 27th September 1863 the first child of James Lees, farm servant at Dalmaca Toll, Coylton and his wife Mary Brown. Siblings Euphemia and David were born before the family moved to New Cumnock to live at the Bank Cottage, where in 1869 , another sister Margaret was born.

The cottages stood at the road-end to the grand Bank House, home to William Hyslop, head of the New Bank Coal Company and his wife Margaret Gibson, who coincidentally had been born at Dalmaca Toll, some seven years before John Lees. 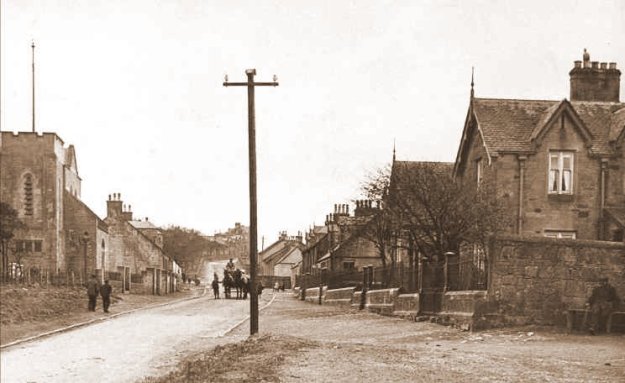 As the New Cumnock coal-field developed and the Bank Cottages had become part of the developing Bank Glen community the Lees family now lived in the Bank Glen row. James Lees  now laboured at the pit-head rather than on the land as a ploughman.  By 1881 the Lees family had grown to include children Jane, Andrew, James and William, while John, now aged 17 was working as a shoemaker’s apprentice, probably to shoemaker George Houston, who also resided at one of the Bank Cottages.

Ordnance Survey Map (1857): Reproduced with the permission of the National Library of Scotland. B: Bank Cottages , S: Stepends

The Lees family moved to Stepends cottage, owned by the Bank estate, on the bank of the Connel Burn. To supplement his income from shoe-making John Lees had also taken to delivering the mail as a post runner . 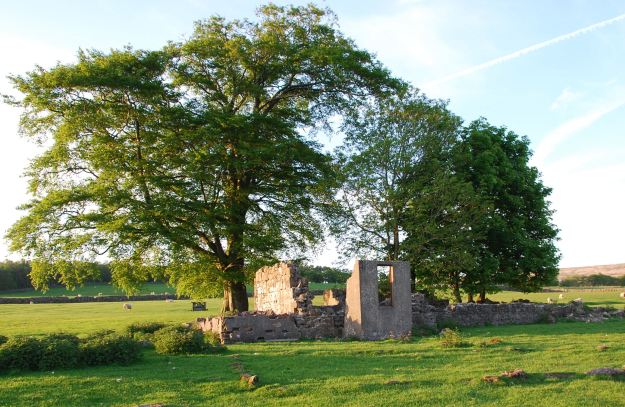 On 28th November 1890, John Lees married Elizabeth (Bessie) Milligan, daughter of Anthony Milligan and Jane Gemmell. Bessie had been born at Pathhead, New Cumnock before the family moved to Brandley farm near the Glendyne Burn, Sanquhar. The family returned to New Cumnock and lived at Linn (also known as Nether Linn) on the Mansfield estate where her father was coachman to the Stuart-Menteth family, baronets of Closeburn and Mansfield.  The couple were married at Linn farm and set up home at Pathhead.

It’s difficult to say for certain when exactly John Gibson and John Lees entered into their business partnership. In 1891 both recorded the same occupation, more or less,  in the census of that year, Gibson a ‘rural postman & shoemaker’ and Lees a ‘rural letter carrier & postman and shoemaker. The combination of these two jobs was not uncommon in New Cumnock as witnessed by George Sanderson in “New Cumnock Far and Away” [1] through identifying George McKnight, John Stevenson and William Barbour as others that walked the length and breadth of the parish delivering the mail while no doubt wearing out their shoe-leather. 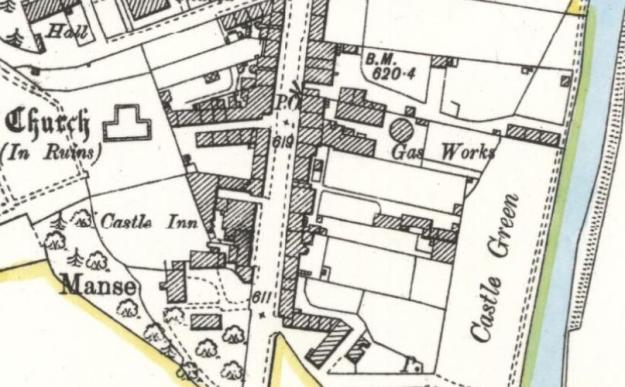 Ordnance Survey Map (1896): Reproduced with the permission of the National Library of Scotland.

In 1892 John Gibson was appointed post-master [2] and he, his wife Maggie and their three young children, William,  John and Jessie lived at the Castle, the main thoroughfare through the growing town.  The post-office (indicated by P.O. in the map above) was located a few hundred yards away on the opposite side of the road from the kirk-port, the entrance to the Auld Kirk and Kirkyard. 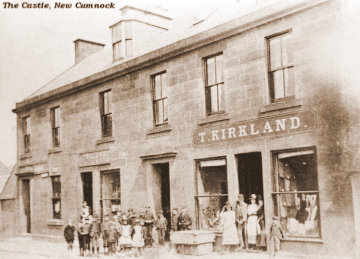 Thomas Kirkland’ shop with Post Office to the left

Thomas Kirkland owned this building which housed the Kirkland home and drapery, the Post Office and  a bakery along with the home of John Wilson and his family, baker at that time.

In 1893 the name of Gibson & Lees appeared in the ‘Ayrshire, Dumfriesshire, Wigtownshire, and Kirkcudbrightshire Business Directory'[3] under the list of Boot and Shoe Makers –

A few years later the name of John Currie had replaced that of William Cowan, while John Gibson was also listed as Bookseller & Stationer.

Tragedy struck the Gibson family in 1894 when John’s wife Maggie died of pneumonia at the young age of 31 years old, a month after the birth of their fourth child James. Sister-in-law Flora McCartney took over the task of house-keeper and her telegraphist skills honed when she had worked at the Railway Station would later be put to use in the Post Office.

‘there was a strong movement in the Post Office to have the official name of New Cumnock changed to Newcumnock. This it was claimed would avoid confusion with Cumnock and it was jocularly pointed out would save a coin every time a person was sending a telegram; one word instead of two and payment was a penny a word.’ 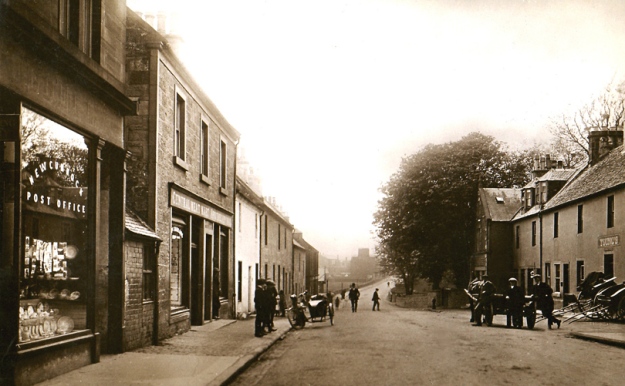 The following year the post office relocated along the road to the Henderson Buildings, owned by grocer James Henderson, where  eldest son William Gibson earned his crust as a telegraph clerk.  The Scottish Post Office Directory of 1903 [4] provided details of the post office at the Castle and the Bank. 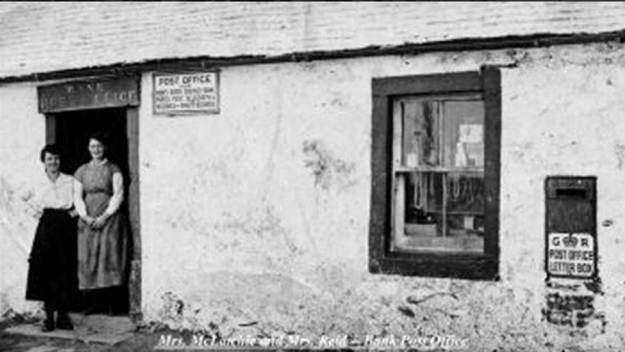 The Directory also recorded John Gibson as a “stationer and china dealer” and a close look at the post office shop window in the Henderson buildings (above) reveals a fine display of fine china; while Gibson & Lees were still one of the established  boot-makers in the town.

John Lees and his wife Bessie were still living at Pathhead at this time. Their daughter Jane had died in infancy in 1894 and since then the family had grown to six with four children Mary, Anthony, James and John.

Sadly John Gibson’s health deteriorated and his sister-in-law Flora McCartney took up the position of postmistress and in February 1905, he passed away at his home in the Castle, aged 49 years old. George Sanderson [1] gives a brief insight into his social life in the town –

“like other merchants his ‘free time’ was taken up by community life: amateur dramatics, his own choral association, member of the band and held all the posts at the bowling green. On his death the post office was employing 12 persons full time”.

On 21st March 1905 the Co-partnership of Gibson and Lees was dissolved and the following ‘Notice of Dissolution’ appeared in the Edinburgh Gazette, 20th June 1905 [5]

‘The subscriber Mr John Lees will carry on the Business in his own name, and has arranged with the Trustees of the late Mr. Gibson to pay all debts due by, and collect all outstanding accounts due to, the late Firm.’

Flora McCartney, was appointed legal guardian of her Gibson nephews and nieces and continued in the role of postmistress at the Castle for a period before William Gibson eventually followed in his father’s foot steps as post master in New Cumnock.

William later lived at Afton Place, between the mill cottages and the bridge over the Afton, next to the premises of William Aird, joiner who in 1915 married Flora McCartney. 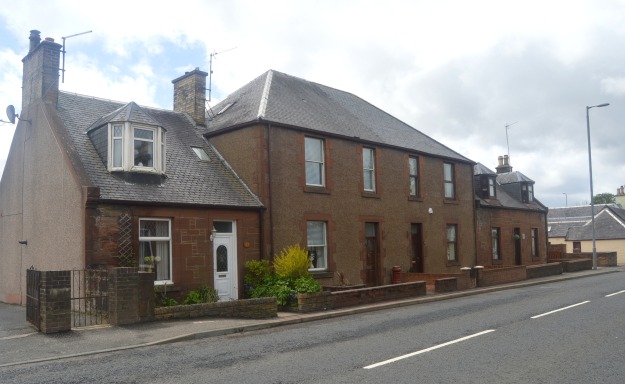 Following the dissolution of the Gibson & Lees business John Lees continued to serve as a postman and established a shoe shop at the Castle in a building owned by draper Alexander Gold.  In the postcard below the Gold building is on the bottom right and at that time housed three shops – James Tweedie, hairdresser (the traditional striped pole can be seen above the barber’s shop entrance), John Lees, shoemaker in the middle and Anderson & Gold, drapers at the near side. The three storey building at the top of the hill is the Henderson building that housed the post office. 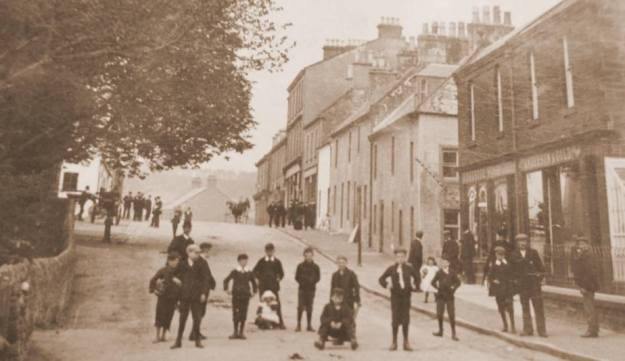 By this time Lees family had moved from Pathhead to live in the Castle and named their house ‘Glendyne’, in honour no doubt of Glendyne Burn, Sanquhar where Bessie Lees (nee Milligan) had lived as a youngster. 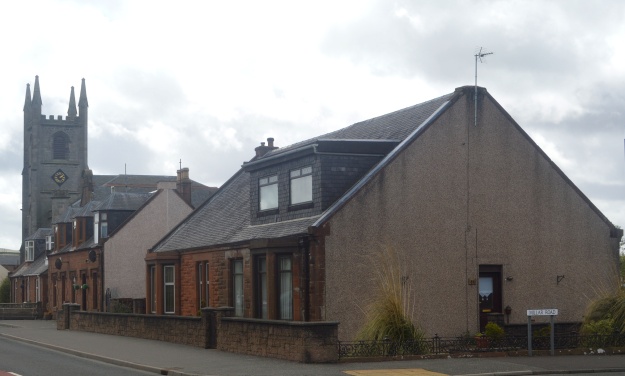 In 1923 John Lees, aged 60, retired as a postman and as a civil servant having served 25 years at the time of his retirement was recognised with the award of the Imperial Service Medal, courtesy of King George V. The occasion recorded in the London Gazette [6]

‘it was estimated he covered a quarter of a million miles. That included twice a week to Barbreck in New Cumnock but getting close to Muirkirk. His return journey was no light hearted affairs, householders on his route were allowed to hand him letters or parcels for posting, up to seven pounds in weight.’

John continued to work in his shoe shop, the building now owned by John Trotter, draper who had also replaced Anderson & Gold in the shop next door. It was now John Lees & Son, with eldest son Anthony Milligan Lees following in his father’s footsteps;  Anthony living at Mataura Villa a next door neighbour of William Gibson in Afton Place – Gibson & Lees together again!

Sadly, Anthony died as a young man, aged 35 years in 1930 and his mother Bessie passed away four years later aged 70 years old. In 1948, John Lees passed away peacefully at home in ‘Glendyne’ at the grand old age of 84 years.

The family business passed to son John and ‘John Lees & Son’ shoe shop continued to operate from the Trotters Building with Peter Turnbull, barber and John Trotter, draper as neighbours. 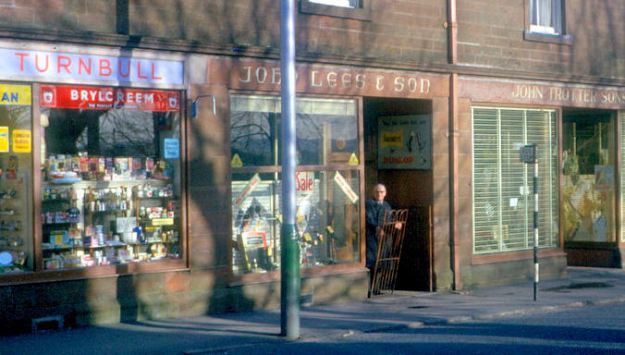 Returning full circle to the Auld Kirkyard with Billy Lees, grandson of John Lees ‘rural letter-carrier and shoemaker’ helping to clear up the kirkyard as part of the Auld Kirk and Village Heritage Trail project’. 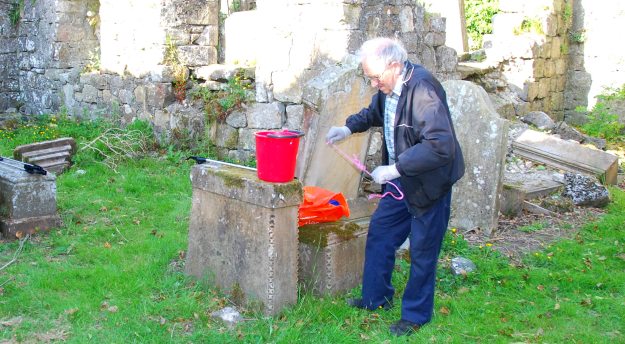 Billy Lees at the Auld Kirk